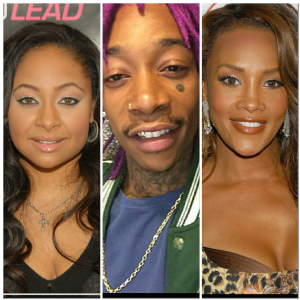 Michael Jackson’s son Prince Jackson has joined The Money Team of Floyd Mayweather. And TMZ.com is reporting that Mayweather is going to train Prince. Interesting.

Paula Patton and Robin Thicke are officially calling it quits. The actress has filed for divorce in Los Angeles, following the couple’s separation more than seven months ago.  I guess the begging didn’t work!

Here’s a clip of my talk break from my Hot HD2 show where I discuss this split.

This Sunday(October 12th) on “Oprah: Where Are They Now?,” Oprah Winfrey sits down with actress Vivica A. Fox in a interview where she reveals the one thing that she regrets the most in her life. What do you think it could be? I’m going to guess no children because I feel like she mentioned that before.

Raven-Symoné caused a stir this week when she went on Oprah’s show Where Are They Now and said, “I’m don’t want to be labeled gay. I’m tired of being labeled. I’m an American, I’m not an African-American.” What do you think of her statement?? Watch below.

Amber Rose recently tweeted: “The mornings are especially hard. The pain…I wake up every morning feeling like my best friend died….. I never knew what a true heartache felt like until now.” Awww, I hope she and Wiz can go on to be great friends and great parents for their child. On the flip side, Wiz dyed his hair purple and seems at peace. Or could that be a cover up? You know how women cut their hair when they’re going through something? Maybe men color their hair? Or is that just Wiz???

Keyshia Cole’s sixth studio album, Point of No Return, is in stores now. Check out the video to her latest single, “Party Ain’t a Party.”

What are your thoughts on these stories?