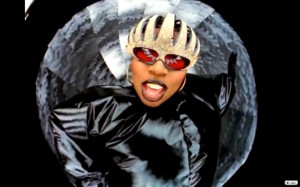 Missy Elliott is a risk taker, beat maker, writer and rapper.  I admire music artists who are not afraid to step out of the box and release a new, refreshing sound, and Missy does that repeatedly.  She has worked with Mariah Carey, Janet Jackson, Aaliyah, SWV and many more. In 1997, she released her single, “The Rain” from her debut album Supa Dupa Fly, released the same year.

In her VH-1 Behind the Music interview, Missy tells about a time she recorded a song for Raven Simone, but was not included in the video because she didn’t quite “fit the image.” Instead, they used her vocals and had another lady in the video. So in response to an industry that glorifies a certain look,  Missy decided to shamelessly wear a trash bag in “The Rain” music video.  She proved that you can be exactly who you are, no matter your size, and still achieve success in the music business. You go girl!