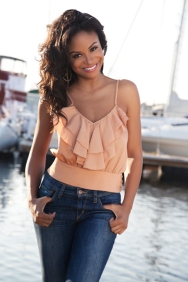 Actress Joyful Drake starred in the film Beauty Shop with Queen Latifah, and Phat Girlz with Oscar winner Mo’Nique, and now she plays Tasha, the sassy wife and mother of twins on the BET series, Let’s Stay Together. The show is going into its third season which is set to premier in January, 2013.  Recently, Joyful Drake played the role of “Amber”, a woman trying to escape an abusive relationship,  in the independent drama feature Bad Ass opposite Danny Trejo and Ving Rhames.

Listen in as Joyful Drake and I discuss the new season of Let’s Stay Together, relationships, tips on how to stay together with your mate, current projects she’s working on, and of course, with all of the relationship talk, I decided to ask the number one question for the fellas…is she single?

Tune in to the conversation.