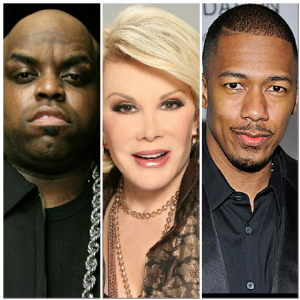 Nick Cannon is finally opening up…a little bit… about the divorce between he and Mariah Carey. He says,  “Trouble in Paradise is the dumbest phrase I’ve ever heard! I would never say that sh-t. Now back to your regularly scheduled programming… #radiosilence” Read the whole statement here.

Chris Brown was in court Tuesday and put an end to  his pending assault case in Washington D.C. Brown copped a plea agreement and pled guilty to misdemeanor assault in court this morning, telling the judge, “I would like to say to the court, I’m sorry.”
Usher’s is getting us read y for his tour “The UR Experience” set to kick off in November.  Joining Usher on the trek is fellow R&B singer August Alsina and DJ Cassidy. Tickets for the general public will go on sale Sept. 8 at 10AM ET at Live Nation. American Express cardholders will be able to purchase before the general release.

CeeLo Green’s reality show “The Good Life” was canceled after only one season and it might be because of his last twitter rant. . And this might be why. Last Sunday Ceelo took to twitter and in a series of tweets he compared rape to a home invasion and implied that women can only be rape victims if they are conscious. Here’s what he said, “When someone brakes on a home there is broken glass…Where is your plausible proof anyone was raped…Women who have really been raped REMEMBER!!!…If someone is passed out they’re not even WITH you consciously! so WITH implies consent.”  He later canceled his twitter account. But now he is apologizing on his Facebook page “I truly and deeply apologize for the comments attributed to me on Twitter…Those comments were idiotic, untrue and not what I believe.” This all points back to Greens felony charge for supplying ecstasy to a woman in 2012, changed his plea from not guilty to no contest on August 29th.

Gabrielle Union and Dwyane Wade got married over the weekend in Miami.  John Legend performed at the ceremony.

Future and Ciara are back on. The two didn’t stay apart for long, and it’s all because Ciara feels strongly about her son needing his father around 24/7.

Floyd Mayweather’s ex-fiancee Shantel Jackson is suing the boxer — claiming he attacked her on multiple occasions and once PULLED A GUN ON HER and threatened to shoot. She’s suing for assault, battery, defamation, invasion of privacy, intentional infliction of emotional distress, harassment and more.

Comedienne, Joan Rivers passed away. In a statement, her daughter Melissa, “It is with great sadness that I announce the death of my mother, Joan Rivers.” “She passed peacefully at 1:17 PM surrounded by family and close friends. My son and I would like to thank the doctors, nurses and staff of Mount Sinai hospital for the amazing care they provided for my mother…Cooper and I have found ourselves humbled by the outpouring of love, support and prayers we have received from around the world .They have been heard and appreciated.”